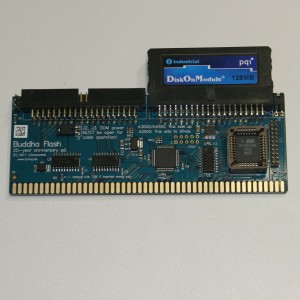 The 20-year anniversary edition of the Buddha flash is exactly what the Buddha has always been: A top-class IDE controller. By popular demand of our loyal customers, we have made a new production run of our successful Z2-controller. Technical data remains the same: Buddha is an IDE-controller for all Amiga computers with Zorro-slots. In addition to two IDE-ports, there's a clock port for hardware originally designed for the A1200 computer. A new feature of the controller is that the IDE ports can supply power for a DOM module. Modern 3.3V technology saves power and only causes moderate temperature increase inside the computer.

All known features of the IDE controller are still available:

The drivers have been programmed by Oliver Kastl, who has set highest standards with the "ALF" drivers and the IDE-fix (later "IDE-max") software. The software includes the whole IDE-package from Elaborate Bytes: Cache CD Filesystem, Harddisk Autopark, CD-changer tool, CD-32 emulator (only for AGA-chipset).

Harddisks or solid-state media can be prepared with HDToolbox or the iComp-installer, which complements the software package that comes with the 20-year anniversary edition of the Buddha controller: We have licensed the OS versions 1.3, 2.1 and 3.1 from Hyperion, and include them on a 128MByte-DOM which is included in the price. The automatic installer makes preparing a harddisk easier than any other software did before: Just a few mouse clicks, and even the rather complicated process of installing media with a 64-bit file system is completed. Our installer brings the ease of use of today's computers to the computer system that introduced simple usability to the computer market in the 1980s.

The Linux- and NetBSD drivers for older versions of the Buddha controller can be used on this new version without change.

Caution: UDMA cables cannot be used with this controller.

(*): measured with the classic "Quantum Bigfoot" harddisk
(**): performance depends on installed accelerator. Maximum transfer rate can be reached with 68020 and 68030 CPUs.

6 other products in the same category: