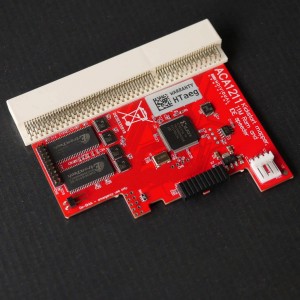 New memory expansion for A1200 from Individual Computers.

This product is no longer in stock

This device adds memory and speeds up read transfers from the internal IDE port of the A1200. The fast memory of this accelerator will let the original processor of the A1200 run up to 2.3 times faster than a stock A1200.

The ACA1211 is installed in the trapdoor slot of the A1200. It uses modern low-power 3.3V SD-Ram which is clocked at 66MHz. This results in in 0-waitstate access most of the times, so the processor runs at full speed almost all the time.

ACA1211 supports the popular 1MB Maprom option. This will allow you to use a different Kickstart ROM (such as the new V3.1.4 from Hyperion) in your computer by just loading it from harddisk/CF card, without losing valuable RAM and without opening the computer.

The ACA1211 goes beyond the limits that were previously known for "plain memory expansions" for the A1200 by providing a total of 11200kBytes of memory while maintaining PCMCIA compatibility for most popular cards*.  You don't need to think about jumper settings: The jumper on the ACA1211 is only required in emergency cases, if the flash ROM on the card has been corrupted.

Adding memory to the legacy 0x00c0.0000 address, your A1200 becomes more compatible with many A500 games that expect a trapdoor memory expansion. The ACA1211 gives a good compatibility boost only because of this little chunk of memory in the right place.

The ACA1211 has two clock ports for expansions: One port is mainly meant for an RTC module, but it can also be used to connect any clock port device that has been designed for the A1200. It's a straight copy of the A1200 internal clock port: Very early A1200 board versions do not have a usable clock port due to an assembly error, so this port will come in handy for owners of such a board.

The second clock port is specifically designed for the RapidRoad USB host controller: It is considerably faster than a normal A1200 clock port, which will result in considerably higher USB transfer rates. This means you will be able to install USB in an A1200 without opening the computer! This port can also be used with a Subway USB controller.

For activating the IDE speeder, you will need a transfer method for the ACAtool to your Amiga.

6 other products in the same category: